We went for our first flight with baby, and it was a long one. We might be insane,  but we figured 5 hours or 20 hours didn’t make much difference. Evey was either going to love it or hate it.
We flew out of the Montreal airport with China Air. We got good deals for our flights because China Air recently started flying out of there. I had called the airline ahead of time to request a bassinet,  and was happy to find out we got it. We were happy to have brought the stroller: it allowed us to store all our stuff and transport Evey through the terminals.
Our first encounter was with a Chinese woman who just loved Evey. A bunch of people stopped and cooed at her. Then she asked if she could get a picture with her. We accepted. Her husband must have taken 15 photos. That was just the confidence boost Evey needed, because after they left, she looked around at everyone else, like she was wondering who else wanted to have the pleasure of her smile. Little did we know this would be just one of many times people would want to photograph her on this trip!
At our terminal,  we watched the planes. Then, when it was nap time, I was able to use one of the nursing rooms near most washrooms. It was a good spot, because it was private and had a chair and microwave (for those with formula). Other than that, it wasnt well suited for nap time. The room was bright, the announcements were blasting, and the turbo hand dryers in the washroom next door came on intermittently.
Still, I managed to get Evey to sleep just as the overhead announcement asked us to come to the terminal desk. Turned out they had switched our seats, so they issued new tickets and we still got the baby bassinet on board.
When it came to boarding time, we held back a bit. We figured 14 hrs on board was long enough, so the later we got on, the better. It was a good thing, too, because once at our seats, the plane was delayed 30 minutes due to ‘issues with our flight plan’.
We had heard the hardest part for babies flying is takeoff and landing.  So, in anticipation of this, we gave Evey ibuprofen once we got on the plane. With everything going on, and trying to get her to swallow her meds, Chris fed Evey her meds with one hand, and poured half the bottle down my leg with the other. I was covered from knee to foot in sticky, cherry coloured liquid.  Perfect in time for the longest trip of our lives. The guy next to us brought me some napkins and then asked the stewardess if he could have a different seat. Nice, I thought, he figures we are in for a disaster.
Evey slept right through takeoff. She slept right through the installation of the bassinet,  too. 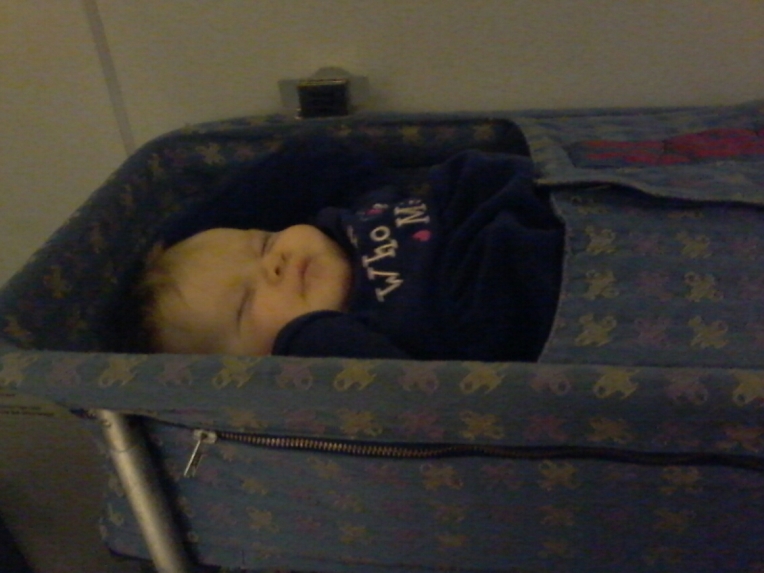 She slept in the bassinet a couple of times,  but mostly slept on me. We had some trouble getting her back to sleep after her initial nap, so I spent some time walking up and down the aisles in her carrier. She made alot of friends. The flight was mostly like that. Nursing,  sleeping, playing. Chris had the pleasure of changing diapers in the tiny restrooms,  where the mirrors fold down over the toilet.  Small space for Evey. Not sure what people with a larger toddler would do. We brought a small bag instead of our larger diaper bag, and this is why.
The landing to our stopover in Beijing was without incident. In fact, she slept through that, too.
At Beijing airport, we stopped at a restaurant for some food, then found a washroom where again there was a Nursing room. 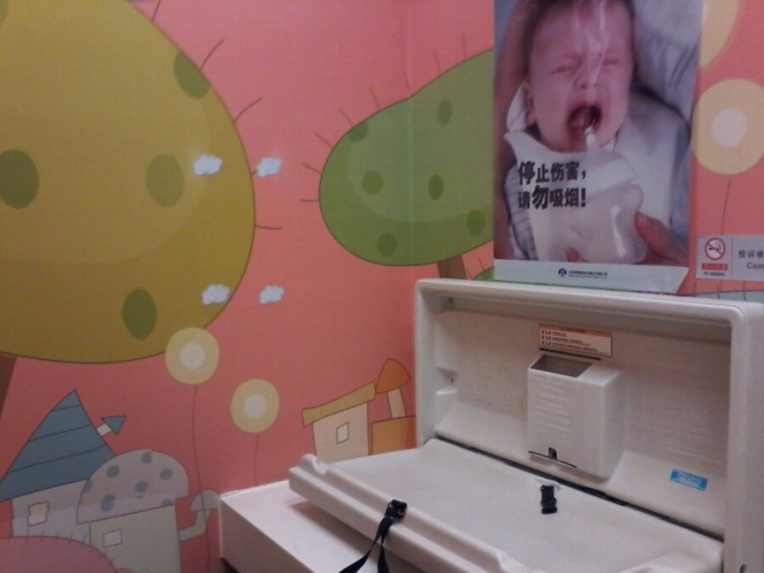 It was an ok space with colourful wallpaper and a creepy poster that I pressume says second hand smoke is bad for babies. The room had a slight sewer smell, as did many areas of the airport. like the Montreal airport, this room was also bright and loud.
We got Evey to nap in the front carrier between flights.

The last leg of the journey was Beijing to Bangkok.  A 5 hr flight in a much smaller plane. We got 3 seats and a window all to ourselves. Evey was great again, but her patience was running thin. The pressure during landing was more difficult for her, but she did ok. No giant fits.

We were so proud of our baby for surviving this huge trip. We were all totally exhausted and our schedule was upside down, but it seemed like this effected us more than her. We all spent the next day and a half sleeping, but now seem to be roughly on the local time (save waking up for the day at 3am, but I think we’ll iron that out).

While it all went as smoothly as one could hope, I’m sure glad we don’t have to do that again for another 6 weeks!